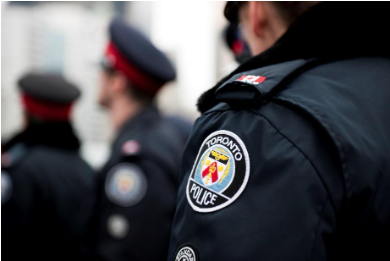 If you are thinking of becoming a police officer, there are key values and qualities that you will need to embrace and uphold, both in your professional role and as a member of your community. The International Association of Chiefs of Police (IACP) follows what is referred to as the Law Enforcement Code of Ethics, originally adopted at the 64th Annual IACP Conference and Exposition in October 1957. The Code of Ethics informs the fundamental values embraced by police forces around the world and stands as a preface to the mission and commitment that law enforcement agencies make to the public they serve.

What does the law enforcement code of ethics say?

The code of ethics identifies the fundamental duty of a police officer as a commitment:

“to serve the community; to safeguard lives and property; to protect the innocent against deception, the weak against oppression or intimidation and the peaceful against violence or disorder; and to respect the constitutional rights of all to liberty, equality, and justice.”

The IACP Oath of Honor further reiterates what is expected of police officials, stating:

“On my honor, I will never betray my integrity, my character, or the public trust. I will always have the courage to hold myself and others accountable for our actions. I will always maintain the highest ethical standards and uphold the values of my community and the agency I serve.”

Perhaps surprisingly, the code also refers to officers’ private lives and the importance of being an example to others at all times and behaving with honesty, integrity, and self-restraint in both official and private capacities. The emphasis is on serving the public and also on having a strong and exemplary character, both when on duty and off. Therefore, it is important to consider the commitment to join any law enforcement agency as something that impacts both your private and professional lives.

In the US, the motto of the police is widely accepted as being “To Protect and to Serve” which, in fact, started out as the official motto of the LAPD Police Academy. Traditionally, it was kept constantly before the officers in training and held up as the aim and purpose of their profession. With the passing of time, the motto received wider exposure and acceptance throughout the department and is now often seen as the core value of police officers throughout the USA.

In addition, the United States Department of Justice sets out some of the core values that should guide the actions of those working in law enforcement. These include honesty and integrity, the pursuit of excellence, cooperation and partnership, and accountability to the taxpayer.

While the basis of policing in the US and Canada is similar, there are also differences. As a Commonwealth country, Canada tends to follow a community-based policing strategy that has far more in common with policing tactics in the UK and other Commonwealth countries, such as Australia, than those seen in the US.

It is perhaps telling that while those in the US refer to a ‘police force’, in Canada, the terminology is officially a ‘police service’. While this may not seem that significant, it is an indication of how the philosophy and values behind policing are very different in the two countries.

The way that the law is enforced is another big difference. Canadian police enact the single Canadian federal criminal code, which is the same throughout all provinces and territories, whereas, in the US, each state has its own criminal code, which may or may not be different from the American federal criminal code. This means that police training, police practices, and investigative policies are standardized across Canada, which is not the case in the US.

There is also a structural difference due to the number of law enforcement agencies. In Canada, there are fewer than 235 police services, whereas the US has 18,000 separate policing organizations in total. In the US, policing is still a growth career, with the need to recruit many more officers in the coming years. In Canada, where there is always ongoing recruitment to replace leaving and retiring officers, things are more stable.

There is also a difference when it comes to state (or provincial) versus federal power and responsibility in policing. Canada, of course, has the RCMP, which is a national police force, whose role is often not well understood outside of Canada. The RCMP enforces federal law but also has legal authority in all provinces and territories, so in practice, it provides policing services to provinces, municipalities, local communities, and other specific locations such as international airports.

In the US, there is no direct equivalent to Canada’s RMCP. As each state has its own criminal code, there is less standardization across the country, with police forces within each state tasked with upholding and enforcing the law as it applies in that state. This does not mean that there are no federal law enforcement agencies within the US. There are, in fact, several, including the Federal Bureau of Investigation (FBI), the Central Intelligence Agency (CIA), Immigrations and Customs Enforcement (ICE), the Bureau of Alcohol, Tobacco Firearms and Explosives (ATF), the Department of Homeland Security, the US Drug Enforcement Administration (DEA), the US Secret Service, and the US Marshall Service.

The core values set out by the US Department of Justice are:

Can these qualities be developed?

While police agencies will be aiming to recruit those who have already demonstrated these qualities to some extent, there is no doubt that the education and training involved in becoming a police officer will be aimed at further developing the key values and important qualities needed for the role.

If you are interested in becoming a police officer, there are routes into the career direct from high school, or from other work backgrounds, as well as education programs you may be interested in. There are also continuing education and professional development opportunities aimed at those already working within the police service.

Both aspiring and serving police officers who are already working in policing and other relevant fields can, in fact, study law in Canada via the BA in Policing available from Wilfrid Laurier University, with an emphasis on working specifically within law enforcement. Officers can choose to complete this program, rather than a traditional law degree, and it will assist them in acquiring or further developing all the key values, competencies, and qualities needed to be successful in a law enforcement role.

In short, the values and competencies needed to take on a role in a law enforcement agency are many and varied. While recruitment processes will certainly focus on finding individuals with the right key values and qualities, the development of these is built into the training that new recruits must undergo, as well as the education programs that serve those who are aiming to work in law enforcement.

Those hoping for a career in the sector can certainly benefit from taking some time to reflect and self-assess, considering if they hold and embrace these key values important to a career in law enforcement. Many would agree that a commitment to such values is essential to serving well and one of many things that recruitment officers will be looking for in potential candidates.

What is The Right of a Defendant in a Personal Injury Case?

7 Ways You Can Stand Out From Other Law Firms

Understanding And Dealing With The Hostile Work Environment

What a Driver Can Do to Avoid Fatal Car Accidents

An Introduction to The Camp Lejeune Water Contamination Issue