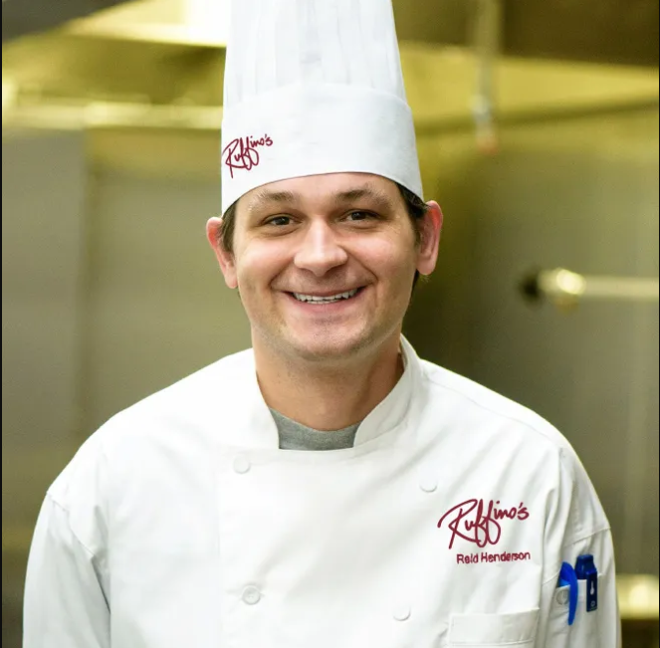 Reid Henderson has been hired as executive chef for Ruffino’s and will manage culinary operations at Ruffino’s Restaurant in Baton Rouge and Ruffino’s on the River in Lafayette.

Chef Henderson is a graduate of the Louisiana Culinary Institute with more than 20 years of experience in kitchens nationwide. Chef Henderson formerly worked as executive chef at Tsunami Restaurant, for the Seattle Seahawks and for the LSU Nutrition Center.

Ruffino’s Chief Officer of Operations Megan Klock said “We are thrilled to have Reid join us as we continue to provide the type of experience where Louisiana can come to celebrate life, regardless of the occasion. I felt a great responsibility in finding the right person to lead our talented team, ensuring that our guests’ expectations and Ruffin’s vision for the future remained at the forefront. Reid is the perfect choice, and I am looking forward to seeing where he takes us.”

Former LSU football player and the founder of the restaurants Ruffin Rodrigue Jr. died in November 2020.

Rodrigue was an All-Southeastern Conference offensive guard at LSU in the 1988 season when the Tigers won the SEC championship. A native of Thibodaux, Rodrigue signed with LSU in 1986 out of Thibodaux High School. He played four seasons at LSU from 1986-89 and became LSU’s starting left guard as a sophomore in 1987 and was the backbone of the offensive line for three seasons.

Ruffino’s in Baton Rouge has been a well-known spot for national media associates as well as LSU fans before and after LSU football, basketball and baseball games for decades.

After graduating in from LSU, Rodrigue worked for Mockler Beverage in Baton Rouge before becoming general manager of DiNardo’s restaurant, which was at the location of the current Ruffino’s in Baton Rouge on Highland Road and opened in 1998.

DiNardo was fired late in the 1999 season, which is when Rodrigue ultimately took over the restaurant and changed its name to Ruffino’s in 2000 opened and Ruffino’s On the River in Lafayette in 2013 at what was the location of Cochon restaurant.

“Prior to his death, Ruffin was a vocal advocate for Louisiana restaurants, fighting for grants and relief for restaurants hit hard by the coronavirus pandemic,” Gallagher said. “Ruffin began his journey with Ruffino’s in 1998 with an understanding that he wanted to create something special, and not just another restaurant. His goal was to develop a place where people could come to celebrate life, regardless of the occasion.”

Blake Miller a former LSU center of Alexandria roomed with Rodrigue during summers while at LSU.

“When I first met him, he was just like he would always be – life of the party, friends with everybody,” Miller said from his insurance office in Austin, Texas. “Just a great person. I can’t say a negative thing about him. Everybody loved Ruffin, and everybody loved being around Ruffin.”

Miller is a year younger than Rodrigue and got to LSU in 1987.

Miller said in 2019, he ran into Rodrigue and his two young children at a Mardi Gras parade in Baton Rouge.

“He was just like he always was,” he said. “Having a great time. He knew so many people. We had lots of great times together.”

Chef Henderson, plans to keep Ruffino’s present menu of Italian-inspired steak and seafood dishes, although he is also looking at new and traditional Italian foods.

Wearing a chef coat embroidered with the Ruffino’s logo, Henderson said “Ruffino’s has a storied tradition in South Louisiana, and I am both honored and humbled by the opportunity to add to its legacy,”