How many types of term plan insurance are available in India? 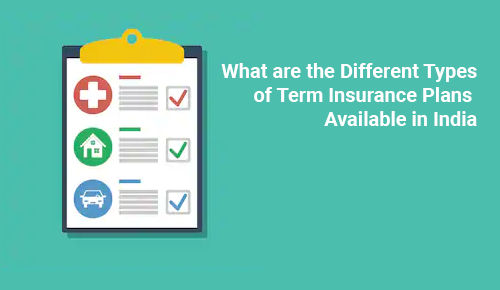 In the last couple of decades, the life insurance industry has developed various types of term insurance plans to cater to the changing needs of its consumers.

Let’s take a quick look at what term plan insurance means before we explore the six types of term plans offered in India.

A term insurance plan is a financial protection plan that ensures that your loved ones are able to sustain themselves financially when you are no longer around. Essentially, the insured individual chooses a plan term, and if during that term they pass away, then their nominee(s) receive the sum assured. The insured person pays a life insurance premium in order to keep the insurance active.

Now that you know what a term plan is, let’s understand the basics behind the six types of term plans:

Here, the term cover is fixed when the insured individual buys the policy. For example, if John buys a life cover of INR 1,00,00,000, then it will remain that throughout the term period.

The policyholder has the option to increase the term cover on an annual basis as long as it is within the policy’s tenure. The premium remains the same as when it was first locked-in. However, the premium for such plans is relatively higher to begin with to make up for the potential increase in the assured amount.

Also known as TROP, these life insurance term plans allow the policyholder to get back the premium they had paid if they survive the policy tenure. The idea behind this is that a significant amount of money goes into premiums, and if the money is not being used as an assured amount for the use of the family, then it can be withdrawn on the maturity of the policy for some use.

This is a more comprehensive type of life insurance term plan. Here, the policyholder can opt for additional covers such as critical illness cover, accidental death cover, etc. which covers the policyholder in case they happen to suffer from a serious illness such as cancer or lose their life in an accident. This type of cover comes with an additional premium.

It is advisable to inform your nominee about your objective behind choosing the particular type of term plan, as you would want them to make the most of the sum assured if they ever need to.