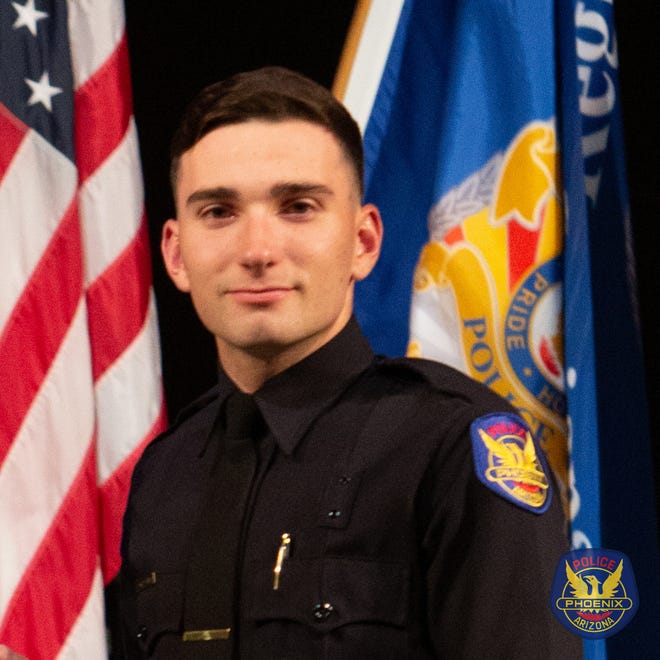 Avondale, AZ — Bikers gathered by the hundreds this past Saturday morning at American Legion Post 61 in Avondale for a motorcycle ride to raise money for the family of Phoenix Police Officer Tyler Moldovan, who was shot eight times while conducting a police investigation in December 14th.

The motorcycle ride started around 10 a.m.at the post near Western Avenue and Dysart Road.

Jason Emm, president of American Legion Post 61 said “We actually had a huge turnout. We had originally, just from this post, 251 riders but other riders joined from separate posts. So, there was well over 300 riders that came out,”

Bikers paid a $20 registration fee to participate in the ride, in which the bikers traveled east on Interstate 10 to Phoenix Police Department Headquarters where they assembled around the station in support of Officer Moldovan. The bikers also stopped at other American Legion Posts on their journey. It was a glorious display of leather jackets and vests adorned with embroidered biker patches from all areas of the state.

Kara Granillo, an organizer at the event said “They would give me $40 and say the other 20 is for donation,”

Granillo said the last time she checked, around midday Saturday, over $1,000 had been raised for Officer Moldovan. “We’ve gotten more since then. It’s so high, it’s something we didn’t expect,” she said.

In addition to the registration fee, a raffle and auction of many things donated by individuals and local companies to support the cause.

As Emm, gestured to numerous tables overflowing with art pieces, gift baskets, and much more.  “Everything that you see here that are on these tables right now is a collection of all the donations that we get from either individuals or big companies,” he said. “Some of the big companies that helped was the Arizona Diamondbacks. They supplied us with two gift baskets with some game tickets in it.”

Phoenix Police Officer Aaron Souza said “The turnout was amazing. It was a lot better than what we initially expected,” “I work for Phoenix Police and I actually brought it up to the American Legion riders… like, ‘Hey, one of our officers was shot in the line of duty.’ There are people out there that do care about him.”

Moldovan and Souza met a couple of times at the police academy and he wanted to organize the happening to back law enforcement.

“Tyler’s dad actually came out this morning. He was here with us and everything. We got to show him around. He got to see the support that he didn’t think he had,” Souza added.

Moldovan’s wife said that her husband has made “marvelous” progress since he was shot on Dec. 14 and has “extensive neurologic injuries” and he remains in stable condition.

According to court documents, Essa Williams, 24, is the dirtbag suspected of shooting Moldovan who was booked on suspicion of attempted first-degree murder, resisting arrest and prohibited possession of a weapon. Bond was set at $3 million and Maricopa County Sheriff’s Office records show he was still in the Fourth Avenue Jail as of Saturday night.

Angelique Gabriel, a participant of the event said “I’m riding because I happen to be the daughter of a police officer,”

“What happens is the motorcycle community says ‘We have a rider down or we have an officer down or someone in the military has fallen.’ What we do is turn around and say ‘We have got someone down; we need to do a ride so we can raise money and donate it wherever we can.’ Everything we can do is going to the family.”

Donations are currently being accepted by The Phoenix Police Foundation and 100% of donations received will go to the Moldovan family.