By Julia_RockzApril 5, 2022No Comments3 Mins Read 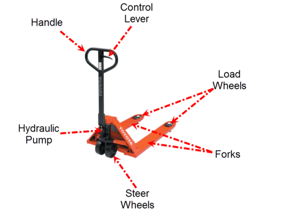 Tools were invented to make man’s work easy and these are no exception. The article below will talk about the best tool for moving equipment and products in a warehouse and its benefits.

When asked about an instrument used in lifting and moving pallets, what comes to your mind? They work like forklifts, but they move lighter loads. They are for moving pallets within warehouses. Manual pallet trucks can be traced back to 1918. The early ones worked by lifting forks and loads by mechanical linkage only, while the modern ones used a hand-pumped hydraulic jack.

These designs consist of a fork of abnormal width. They are recommended for moving irregular cumber some objects, e.g., safes and ATMs.

These are used to haul large rolls, teals, and large pipe sections. They can cradle round objects to stop them from rolling during transport.

Jacks that are stainless steel can function well in harsh conditions without being corroded. They may have grease fittings and specialized hydraulic pumps.

This type of jack has very long forks of low profile. This enables the tool to pick up a four-way pallet from any direction.

After this jack picks up the load, it can rotate it up to 90 degrees. The pellet can either be rotated towards the operator or the sides. This helps reduce the operator’s risk of injury.

This system is used to give the tool a higher stroke than what the hydraulic piston provides. It is used to provide ergonomic access to pallets content.

The jack has a ’tiller’- like lever used to steer it. The jack has a hydraulic fluid released by a small handle, allowing the forks to drop. Its front wheel is attached to levers fixed to linkages which go to levers in its cylinder. Immediately the jack is lifted, the wheels are forced down by the links.

The forks are then raised by the wheels vertically over its front wheels, lifting the load upwards until it leaves the floor. The load is lifted just enough to allow the tool to move while not touching the floor. In the absence of a forklift, a pallet truck can also be used to place pallets in a trailer and organize them.

Since jacks are used to move heavy equipment or products, it saves workers the stress of moving these heavy products, which may cause injuries over time or even accidents.

Though these tools don’t come cheap, they would save you a good amount of money eventually since they move very heavy equipment at a go which you would, in turn, pay several people to move. Most of these tools also use electricity which will, of course, be cheaper to run as opposed to using machines that consume petrol.

When workers do a lot of strenuous work, they become less motivated and fatigued as opposed to when they are allowed to work using machines and tools that would ease their work.

In conclusion these tools help a great deal but they also have their downside as they can make people jobless because one person operating it can replace several workers.  Check pallet truck price in Kenya.

How to Get Started in Guest Posting

Social Media Marketing Made Simple: What You Need to Know