By Julia_RockzNovember 12, 2021No Comments4 Mins Read 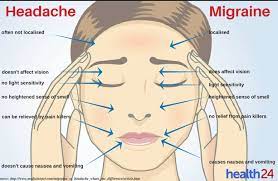 Anyone suffering from migraines is well aware of how excruciating the experience is. A type of headache, migraines are characterized by throbbing or pulsating pain in one half of the head.

Migraines also affect the eye and lead to pain in the neck as well. However, the impact of ache is not limited to the head alone, but the entire body reels from the impact. Weakness and nausea often accompany migraines as well.

Moreover, migraines also cause sensitivity to light and sound as well.  Unlike ordinary headaches, migraines are a more complex neurological condition. They are a composite of several stages, each presenting its own set of symptoms that take a further toll on the body.

It is imperative that you seek help from a Neurologist when facing migraines. Many people end up abusing painkillers to get a reprieve from the extreme pain, however, that then leads to problems of its own.

The symptoms of migraine are contingent on its stage. There are 4 main stages of a migraine:

Prodrome: This refers to the time before the onset of the migraine. It starts days before the migraine, or at times, even hours. It causes fatigue, sensitivity to light, bloating, digestive issues like constipation or diarrhea.

Many people also suffer from thirst and food cravings or conversely, loss of appetite. Mood changes are also common in such cases.

Aura: It sets in just before the migraine attack. Aura is generally a signal from the nervous system. Its symptoms include vision issues like tunnel vision, the presence of black dots, tingling in one side of the body, ringing in the ears.

It also may cause heavy feelings in the arms and legs. Speech issues are also common. It may also lead to changes in smell, taste, or touch.

Attack: A migraine attack is the demon in its full glory. It may start off as dull and throbbing pain and continue to become more intense over time.

A migraine attack may be limited to one side of the head or even the front of the head. In most cases, the attack is severe enough to cause vomiting, else, it may lead to nausea or clammy feeling.

The period of attack can vary greatly. In some cases, the attack may last for few hours, in others, it may even go on for days.

Postdrome: This refers to the time after the attack. It tends to last for up to a day after the attack. Symptoms of postdrome include fatigue, weakness, cravings or, in some cases, lack of appetite. In certain people, postdrome may be remarked by feeling of euphoria.

There is no cure to migraine, however, its symptom can be managed via medicines and home remedies.

Home remedies: You can improve your symptoms at home by maximizing your comfort. Since people experiencing migraines have sensitivity to noise and light, they can benefit from laying down in a quiet and dark place.

Moreover, using hot and cold compresses can also help with the pain. Drinking sufficient water, especially if you have been vomiting, is vital as it can otherwise not only cause headaches from dehydration but also weaken health as well.

Medication for migraine: Over-the-counter pain killers are sought after by most people suffering from migraine, due to their ease and availability. Drugs most often used include acetaminophen, aspirin, caffeine, ibuprofen.

However, one needs to be very careful about taking these pills, as overdoing them also leads to rebound headaches, that compound the condition of the patient further. There is also the danger of tolerance, whereby a higher dosage needs to be taken for the medicine to be effective.

There are other medications that your Neurologist in Islamabad may prescribe to improve the symptoms. These include triptans, CGRP receptor antagonists, ergotamine, etc.

Pregnancy and Chiropractics – Who is Making a Difference?

3 Online Vitamin Buying Mistakes and How to Avoid Them